it’s a bird! it’s a plane! it’s our super speedy sheep of steel beret!  we opened our box of sheep of steel twisted bobbles handspun yarns yesterday and got straight to work.  we knit the entire 36 row beret in about 2.5 hours — no doubt less time than it would take to walk to madison avenue, battle the crowds, and buy a beret (much needed these days, given that it’s FREEZING in NYC!).   irem, the british textile artist that spins each skein by hand, has pretty much done all the hard work for you.   we think the resulting fabric is intensely mesmerizing! 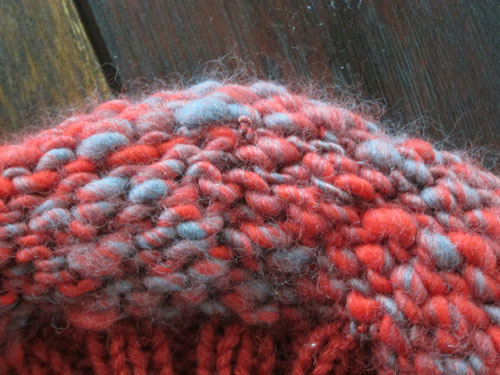 knitting with sheep of steel’s handspun twisted bobbles yarn is a sensory pleasure. it’s soft to the touch, lushly coloured, and has got these overtwisted bits that are just a lot of fun!  the trick to knitting with the yarn is to not straighten the yarn out as you knit it; rather, keep the little twists whole, letting them add bits of squiggly delight to the finished fabric. we paired it with our clever camel yarn, as the contrast of uniformly spun yarn underscores the strange and beautiful texture that flowed from irem’s hands. 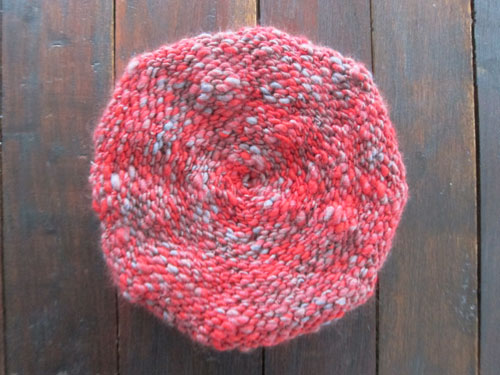 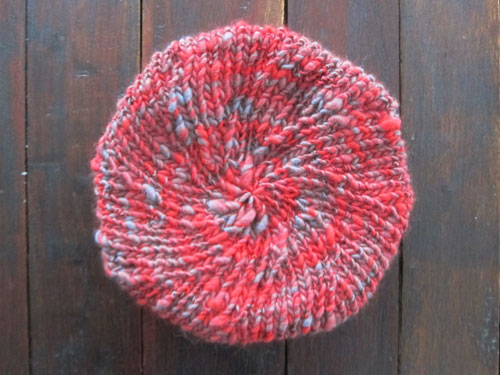 we had about 39g of sheep of steel yarn left over, and are working on another quick knit project!  read on for the beret pattern . . .

P2tog: Purl two sts together.
P1 F&B: make 1 increase by purling into the front and back of the same st.
A: yarn A; shown in Clever Camel Poppy
B: yarn B: shown in Sheep of Steel Twisted Bobbles Red Aberdeen

Break yarn, leaving a 6” tail.  Thread the yarn through the 8 remaining sts, and pull tight to close the crown of the beret. Weave in all loose ends.   To make the beret reversible, weave the yarn so that it is well hidden on both sides.  Sheep of Steel yarn is very well suited for camouflaging the woven in end parts! 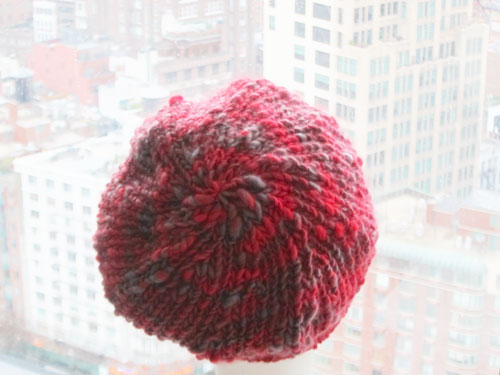